What is a Convertible Car

The term convertible is the abbreviation of the French word cabriolet. A convertible car is an open car with up to five seats. But what makes it different from a roadster?

A convertible car is usually based on the coupe variant of a model series and traditionally has a soft top made of fabric or PVC, which disappears under the soft top when folded back. Other models use steel folding roofs. In contrast to the convertible, a roadster in the classic sense has an independent body and is not based on an existing car model.

The term roadster originally referred to an open, two-seater car with a low seating position almost at street level. The tradition comes from Great Britain and dates back to the early 20th century, when roadsters were still on the road without a hood and windshield. There was often only one emergency seat at the rear. Today, car manufacturers and drivers do not always use both terms separately.

The classic convertible car with folding top and fully retractable side windows is one of the oldest body styles in automotive engineering. Because even in the early days of the car, open driving on warm sunny days was one of the most beautiful forms of mobility.

For this, motorists paid with significantly less comfort in the cold and rain. The elaborately worked folding covers made of fabric were also not cheap. Later, fixed roofs made of steel, so-called hardtops, which could be placed relatively quickly on the open cars provided a remedy against cold and wind noise.

The first production convertible car with an electrically retractable roof made of steel was the Peugeot 401 Eclipse from 1935. Larger quantities reached the Ford Fairlane Skyliner, which came in 1957 as a so-called retractable hardtop on the US market. However, its complicated and vulnerable top mechanism prevented economic success.

Finally, the breakthrough of the folding hardtop was provided by the Mercedes SLK roadster, which was presented in the mid-nineties. It was actually the first everyday combination of coupe and convertible. After the Mercedes success, almost all major manufacturers, for example, BMW and Porsche, put convertibles with folding hardtops on the wheels.

Convertible Car - Advantages of a Hardtop:

Since the 1960s, when Mercedes-Benz launched its W113 series, nicknamed the Pagoda, hardtops made of steel, aluminum or glass(fiber) reinforced plastic (GRP) have been part of the scope of delivery of convertibles. When the folding roof is lowered, these roofs are firmly placed and locked to the window frame. In this way, they protect passengers from cold, moisture and loud wind noise. 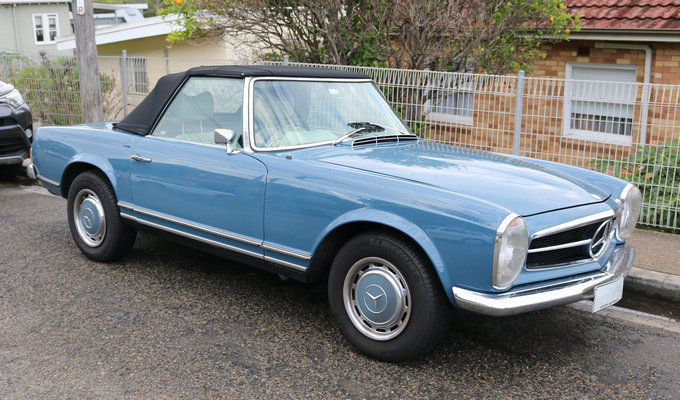 Convertibles with a hardtop are as comfortable as a coupe and are also suitable for long distances and in winter. They are also more secure from hacking, and passengers are better protected in the event of accidents.

A significant drawback is the size and weight of hardtops. They cannot be mounted by hand and are only available for two-seaters. But they are much cheaper compared to the folding hardtops.

With retractable hardtops, owners can quickly switch between an open and a fixed roof, this is the great advantage of this model. The change takes place at the push of a button within a few seconds.
So, the owners of such a convertible car do not need a place to store the bulky hardtop, or outside help to assemble or disassemble the roof.

They are available for both two-seat sports cars and four-seat convertible sedans. The disadvantage is, for example, the high cost and very little space in the trunk when the hardtop is stacked.

The greatest advantage of a folding roof made of fabric is undoubtedly the nicer line that vehicles equipped with it have. Since these conventional roof structures can be folded very compactly, the vehicle designers can draw lower rear sections. They look much more aesthetically convincing.

In addition, today the materials of the covers have also improved so much that they insulate the cold and noise when driving very well. The tops are without exception electrically driven and are therefore just as comfortable as the folding hardtops. Modern rollover protection systems in the form of extendable headrests now protect passengers as well as the roofs of closed sedans.

When buying a used convertible car, you should pay special attention to the convertible top. For folding roofs made of fabric, it is necessary to check whether there are no cracks in the inner and outer cover, whether the rear window is not scratched, and whether the electric folding mechanism opens and closes quickly and without extraordinary noise.

You should check the folding hardtop even more carefully, as any damage during repair can be very expensive. On the one hand, the components, some of which are heavily loaded, could be poorly maintained. However, it is mainly operating errors that can lead to damage.

Suitcases or bags that have been forgotten in the trunk repeatedly cause scratches on the sheet metal and damage to the closing mechanism when opening the convertible top.

Roadsters were two-seat sports cars that did not have a fixed roof or only the simplest tarpaulins for covering the seats.

This is a car with a convertible top and four side doors, but without side windows, instead of windows, various curtains or protective screens were used, which were fastened with buttons.

A targa roof is a car roof with a removable roof center part. The rear window remains firmly installed here. The most famous convertible car with this roof construction is the 911 Targa from Porsche.

With the T-Top, two fixed halves can be removed from the roof of the convertible car. For stability reasons, a middle web between the windscreen and rear window frame is retained. Among the most famous representatives of this roof form are the Chevrolet Corvette and Chevrolet Camaro from the seventies.